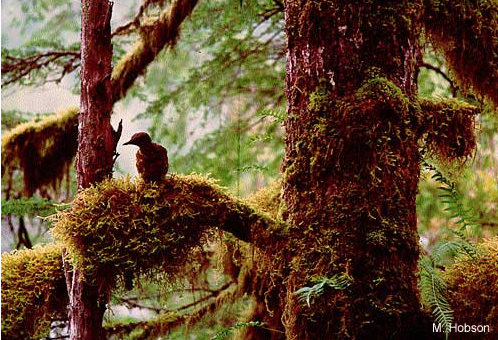 In the late 1800s, Native Americans told naturalists working in Alaska that the marbled murrelet, a small seabird that flies underwater when fishing, breeds in the ancient forest.  Apparently they weren’t listening. The nesting habits of this small chunky alcid remained a mystery until the 1970s when a tree surgeon working on a damaged branch over a campground in a state redwood forest came across a nest, not a first, with a lone chick, unusual, but a chick that had webbed feet, a first.

One clue had been noticed prior to this discovery, murrelets flying up rivers miles from the ocean during breeding season, and more became apparent after. For example, the species ranges from Monterey Bay to the Aleutians, and its pelagic populations are closely correlated with proximity of old growth forests.

One of the most destructive of our many destructive economic narratives is the claim that economic and ecological outcomes are at odds. Among the most polarized, brutal, and misunderstood of battles engaged by this polarity were the Timber Wars concerning California and Oregon’s old growth forests.

They didn’t have to happen. The team of biologists and historians who put together Coast Redwood, A Natural and Cultural History, details how, in the 1930s, the Pacific Lumber Company, under the leadership of Stanwood Murphy, became a pioneer in sustainable timber harvesting, cutting only certain percentages of trees leaving others to hold the soil together and for future harvest. PL maintained these practices for half a century. Their timber holdings were their major asset, and their employees believed the “extensive holdings and sustained-yield logging would ensure their long-term employment.” The last Murphy to run the company said, “We were the good guys. It was fun, it was easy—it was a great life.”

In the 1980s, Pacific Lumber owned about 70% of the old growth forest held privately. Unfortunately for their employees, PL’s under-valued stock came to the attention of Houston-based Charles Hurwitz and his company, Maxxam, who financed a hostile take-over with junk bonds and, heavily levered, raided PL’s pension fund, and began selling off secondary operations, like a welding shop, and clear cutting to service the debt.

By this time the marbled murrelet’s population had been decimated by logging, declining fisheries, you name it, and its habitats were protected. When PL illegally entered those habitats to log valuable old-growth trees, the Environmental Protection and Information Center, among others, sued PL, eventually taking the suit to federal court, who sided with the environmental groups, noting PL had used “fraudulent wildlife assessing methods,” concerning murrelet populations. PLC’s licenses were revoked for “gross negligence & willful” violations of state forestry regulations, and eventually the land was purchased from PL and taken into public hands.

The marbled murrelet isn’t the only species up there. In the late 1990s researchers led by Humboldt State’s Steve Sillett began climbing into redwood crowns. (If you’ve read Richard Powers’s The Overstory you know something about this, but there’s more.) The crown of one mapped redwood contains 210 trunks and fills 32 cubic yards, the tree itself embodies over 37,000 cubic feet of wood. Within those crowns, in addition to ferns, lichens, mosses and epiphytes, huckleberries produce fruit, and some trees become natural bonsais, while others can grow to 8 feet. Wandering salamanders have been found breeding in water-logged humus mats above 200 feet. Salamanders are good climbers, but it is hard to imagine what would impel an individual to use the energy it would take to make that climb, and some biologists believe centuries ago salamanders climbed onto young trees and rode up as the tree grew, as did generations of offspring. There are also crustaceans and, so far, no one knows how they got there. How many STEM jobs, some entry level, could those aerial habitats also support?

Murrelets begin nesting in April, the chicks fledging at about 4 weeks. Until recently no one knew how the young birds reach the ocean. It has now been observed that they fly out of the nest and to sea alone in the evening dark, another mystery solved.

Note – (1) Philippa has done research and writing all her working life, including for the Museum of Natural History in New York, and for the Office of Ray and Charles Eames in Venice, California. In the late 1990s, John Liscio hired her to try her hand at writing about macro-economics, a welcome challenge. In recent years she has written a series of essays aimed at breaking down the manufactured belief that economic and ecological outcomes are at odds, often tracing the roots of misunderstandings. In addition to co-editing TLR, aka The Liscio Report, she writes for Hudsonia, a small ecological research outfit in New York’s Hudson Valley, and searches for wildlife and fossils throughout the region.